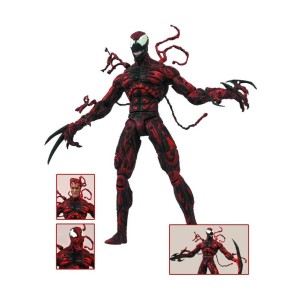 2016 is still 2 days away, but Diamond Select Toys has already given a preview of some new things they’ll have on display!

For Marvel Select collectors, no news may be more welcome than the confirmation of a rerelease of the Carnage Select action figure. This detailed figure barely showed up in comic stores, and has spiked as high as $80 on eBay! Now this 8-inch figure is coming back, giving you an extra chance to grab him.  Carnage has 16 points of articulation, three interchangeable heads, swappable weapon hands, and removable tendrils that let you customize your figure’s appearance.  He will retail for $24.99.

In addition to that welcome reissue, Diamond also announced new Marvel products in their Statue, PVC, and Minimates line: 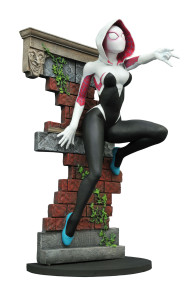 A Diamond Select Toys release! One of the most exciting new characters in the Marvel Universe is now part of one of its most exciting new collectible lines! The Amazing Spider-Gwen, a spider-powered, hard-rocking Gwen Stacy from a parallel universe, gets the Gallery treatment with this 9-inch scale static PVC figure! Posed on the side of a New York brownstone, Spider-Gwen is sculpted with a high level of detail and exacting paint applications. Packaged in a full-color window box, she is in scale to other Gallery and Femme Fatales PVC figures. Sculpted by Jean St. Jean!

A Diamond Select Toys release! Get ready for Round 2! The action of Marvel’s Captain America: Civil War continues with a second assortment of Minimates mini-figures based on the film! In this next batch of two-packs, Battle-Damaged Captain America takes on Battle-Damaged Iron Man, Black Widow meets Crossbones, Agent 13 faces an evil Thug and a rare, one-per-case variant set pairs Secretary Ross with another Thug! Each 2-inch Minimates mini-figure features 14 points of articulation, as well as character-appropriate accessories and fully interchangeable parts. Designed by Art Asylum! 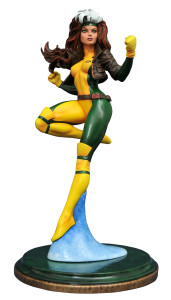 A Diamond Select Toys release! This is the statue you’ve been waitin’ for, shugah! The Marvel Premier Collection continues its tour of the icons of the Marvel Universe with this statue of the X-Men’s Southern belle, Rogue! Depicted in mid-flight, the power-stealing sweetheart is wearing her fan-favorite 1990s yellow-and-green costume, with leather jacket, and measures approximately 12” tall. Limited to only 3,000 pieces, this numbered resin statue is packaged with a certificate of authenticity in a full-color box. Sculpted by Clayburn Moore!

All these items and more will be on display to wholesale buyers and press at New York’s Toy Fair International! Stay tuned to Marvelicious Toys, as well as our Facebook and Twitter feeds, for all the updates right from the show!