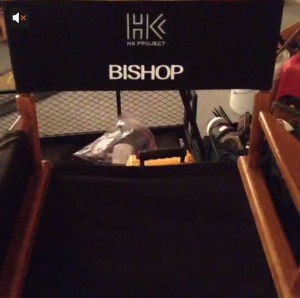 If you’re excited about 2014’s X-Men film X-Men: Days of Future Past then you should follow Bryan Singer on Twitter.  With his Twitter feed @BryanSinger the returning X-Men director has tricked out early casting announcements and photos from the set.  But this morning Singer may have given our biggest piece of information yet–a list of several new mutant heroes appearing in the upcoming film.

With a tweet titled “Every mutant needs a place to sit” Singer posted a rapid-fire video of chairs on the set, the backs silk-screened with the name of a film character.

Do not read any further if you wish to avoid spoilers

The Marvel Comics characters shown on the chair backs are:

While Colossus had brief scenes in the second and third X-Men films, this is the first cinematic appearance of Blink, Warpath, and Bishop.

The full video can be seen on vine.co

You can hear Now Playing Podcast’s reviews of Singer’s previous X-Men films in the archives section of NowPlayingPodcast.com and join us later this summer as we review the next X-Men film–The Wolverine!

You can also hear us in a few weeks as we review Singer’s last superhero movie, 2006’s Superman Returns as part of the NowPlayingPodcast.com Superman retrospective series

And for all things Marvel Comics, Marvel Movies, and Marvel collecting join us every Wednesday on the Marvelicious Toys podcast.