Blade: The Series – Season 1, Episode 5: The Evil Within 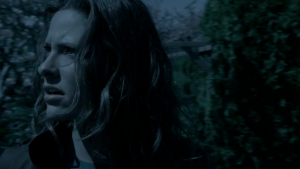 Do filmmakers really think audiences can't tell the difference between real night shooting and daytime shots put through a filter? Or do the filmmakers just not care?

Again, this next episode of Blade continues where the last ended, with Krista (Jill Wagner) in the pool of blood at the house of Leichen having a vision showing where rogue vampire Det. Boone (Bill Mondy) is hiding.  And I can’t help but wonder if Krista sees her vision as we do–poorly filmed behind a darkening lens filter to try and make daytime look like nighttime.  In the vision Krista is visited by her dead brother, and then sees Boone saying he’s going to Louisiana where he is trying to make contact with House of Armaya.

With this information, Krista’s sire Marcus Van Sciver (Neil Jackson) sends Krista and her vampire mentor Chase (Jessica Gower) to Louisiana to capture and kill Boone.  After they leave we see Frederick, Chase’s ex-husband and Leichen guru, has discovered one of Krista’s serum vials, leading the Leichens to believe Krista may be swayed to their house.  Frederick resists this idea, not wanting to upset Marcus, or perhaps Chase.

Chase and Krista lead several House of Chthon soldiers to Louisiana, interrupting Boone’s attempt to meet with one of the Armayaian pure bloods.  Several vampires of both houses die, and Krista’s attempts to save a human Boone took captive.  Boone wounds the human and runs, and when Chase walks in and sees the wounded human, she believes Krista stopped for a mid-fight snack. 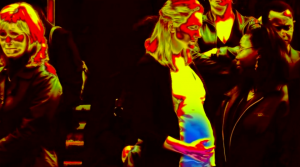 With such a drastic temperature change, wouldn't Vanessa notice her stomach skin is several degrees colder?

Boone hides in a bathroom and Chase shoots blindly through the bathroom door killing a vampire she believes is Boone but is actually a random Armayain.  But thinking their mission was accomplished, Chase and Krista return to Detroit.  But the human Krista saved is taken to a hospital, and interrogated by FBI Agent Collins (Larry Poindexter), who has been trying to find Boone, and helps confirm to him that vampires are real.

Meanwhile in Detroit Blade (Kirk “Sticky Fingaz” Jones) continues to follow his lead on Dr. Vonner, the gynecologist who committed suicide last episode.  At Dr. Vonner’s funeral Blade spots Vanessa, the waitress to whom Krista delivered a package back in Episode 3.  Using his infrared goggles, Blade realizes whatever Vanessa is carrying in her womb, it’s body temperature is too low to be human.

While following Vanessa, Blade has an altercation with a drug dealer and shatters a baseball bat in the dealer’s face.  I wonder if this was to set up a new enemy for Blade, or just filler.  Time will tell.

Chase returns to Detroit, and Marcus asks her to immediately take Vanessa to Berlin to keep her away from the purebloods, and as if on cue Vanessa is visited by Charlotte (Emily Hirst) – a pureblood vampire “child” and one of the rulers of the House of Chthon.  Charlotte knows Marcus is up to something, and is remaining in Detroit to keep an eye on Marcus.  Charlotte even recruits Marcus’ aide Glynnis to perform a full audit of all the activities of the House of Chthon. 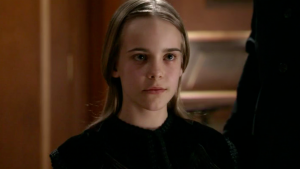 Blade tracks Vanessa to Berlin, where he infiltrates the nest and rescues Vanessa (though she thinks she is being kidnapped), and sets off a bomb which kills Chase.

And back at the House of Chthon, Krista continues her search for the Aurora vaccine.  After several aborted attempts at stealth, she finally loses patience and breaks the glass case to steal a sample for Blade.  But she is caught in the act by Marcus who confides in Krista that the vaccine is a ruse.  Aurora only works for a couple of days before vaccinated vampires have a negative reaction and decompose.  Marcus has a plan to use Aurora so he can rule the House of Chthon and offers Krista a spot at his side.  She agrees, but whether she’s resigning herself to her life as a vampire or continuing her deep cover we need to wait until the next episode to see.

I have to say Blade: The Series hits its stride with Episode Five.  It was action-packed and exposition-light.  Previous episodes would have spent fifteen minutes on Krista’s vision alone, but here it was under five minutes, and before we knew it they had gone to Louisiana to kick Boone’s ass.  And once in Louisiana we are treated to a huge gunfight, with vampires being dusted left and right.

Then later we have another action sequence with Blade in Berlin.   There is less action, but what action it has is more expertly executed.  We also see that Sticky Fingaz has been practicing his martial arts, or his stunt double got an upgrade, as we get a well-staged martial arts fight that is almost worthy of the Blade feature films.

This is the first episode of Blade that doesn’t feel cheap.  The hokey vampire ashings now take place behind warped glass or closed doors.  And they milk a hospital explosion from several angles, and even engulf Chase in convincing CGI fire.  Perhaps this is to the credit of a better director? 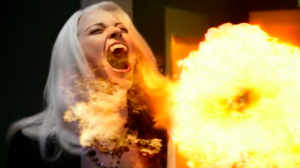 My favorite vampire gets hot and bothered.

Even with all these improvements the episode still had several problems, the first of which is the introduction of Charlotte, the girl vampire who is Marcus’ superior.  Evil little children are nothing new; we’ve seen them done better in Children of the Corn, Village of the Damned, Pet Semetary, The Omen, and so many others.  And as far as evil vampire little girls, this is coming perhaps a decade too late after the theatrical adaptation of Interview with the Vampire where Kirsten Dunst stole the evil from Tom Cruise and Brad Pitt.  And sadly the little girl who plays Charlotte is no Kirsten Dust; she is wooden and her performance comes off not as powerful but petulant.  Between the hackneyed concept and the poor acting, this is a major misstep.

Another problem with this episode is the death of Chase.  I see how this could be considered a plus; killing major characters to keep the audience off their toes is a staple of such shows as Heroes, Lost, and The Sopranos.  But Chase was one of the most malevolently fun characters in the series and her death is a major loss.  More, it feels like her death was extraneous and unfulfilling.  She doesn’t get the glory of dying in a fight, nor is she even Blade’s target.  She’s collateral damage in an explosion she’s too inept to escape.  If Chase had to go, I would have liked it to be earned.  (Note: I learn later I fell for it, Chase survived this.  Kudos to the writers for fooling me) 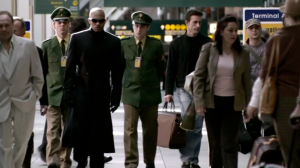 Do you think Blade pays for a checked bag or just carry-on? Does he read on the flight? Play on the Game Boy? These are questions I should not be asking.

And in the most head scratching moment, Blade flies to Berlin and we see him in the airport.  Does he fly coach?  Does he check his glaive? He’s given a cache of weapons by a Berlin airport security officer who seems to know of his reputation, but what if she didn’t?  The entire thought of Blade traveling internationally does not hold up.  We should have skipped that scene and just had Blade somehow arrive in Berlin; showing him travel raises questions better left unanswered.

Still, if I’m bothered by these things, it means the show has finally engaged me with its action and intrigue.  While I don’t like the little girl vampire, I am interested in Marcus’ fight with the purebloods and the strange dead fetus in Vanessa’s belly.

More, I think I’ve figured out two things – first, I think Marcus is going to use the vaccine to inoculate the purebloods only to have them be killed, giving Marcus rule of the House.  Second, I wonder if the vaccine Marcus is working on is the creation of half-vampire daywalkers.  After all, the creation of Blade came when his pregnant mother was turned into a vampire, and now we have pregnant women carrying dead babies that I presume will be vampires…an army of evil daywalkers could be quite the coup, though I know the series will not last the 18 years needed for the infants to come of age.