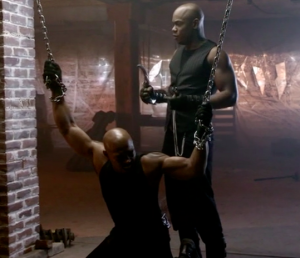 With episode four of the Blade series we are given yet another episode of Blade that serves to deepen the characters’ backstory in the least interesting manner possible.

Now that I am one-third through the entire Blade run, I’ve come to a conclusion on where I sit with this series–it’s not good but it has potential, and some aspects of the show  I like well enough to keep coming back for more.  There are many television series that I’ve watched which fall into this category, some of which come to mind are True Blood, Smallville, Heroes, and the latest incarnation of V.  All of those were series that I watched religiously, but to which I never devoted my full attention, often keeping them on while I do other things, paying the show only half of my attention until a big moment occurs.

So given this, I can say that were I not watching this for Now Playing, had I just caught Blade when it was first run on Spike, I would have watched every episode, but not paid full attention.

However my duties for Now Playing don’t give me the luxury of being halfhearted,  so I watched this fourth episode of Blade giving it 100% of my attention, and not feeling rewarded for my efforts..

In this episode, our multiple storylines continue to progress at a snail’s pace, with the the hunt for cop-cum-vampire Detective Boone heading to the forefront  though Bill Mondy, the actor who portrays Boone, never makes an appearance.  FBI Agent Ray Collins (Larry Poindexter) meets Boone’s former partner Detective Gibbs.  The two search Boone’s apartment and find a book of the House of Armaya, but the text is in German.  Gibbs also delivers all of Boone’s open cases, and Collins notices the open case of Zack Starr, and his missing sister Krista (Jill Wagner).  To be continued I’m sure. 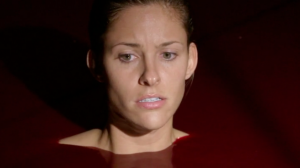 The house of Leichen, gonna make vamps sweat 'til they bleed.

Meanwhile, the House of Chthon is also on the hunt for Boone as the corrupt cop was aware of Project Aurora.  Marcus Van Sciver (Neil Jackson), the man in charge of the Aurora vaccine, asks Chase (Jessica Gower) to take Krista to the House of Leichen – a group of mystical vampires that have sworn off human blood.  The Leichens have what is described as the vampire version of a sweat lodge –  which allows bloodsuckers locate the whereabouts of the people they’ve turned.  Marcus hopes Krista can find Boone (whom she bit in the pilot) in this way.

Performing the ritual is Fredrick, Chase’s ex-husband.  Chase’s past marriage was mentioned in two of the first three episodes, so seeing him was no surprise.  What was a surprise was that he seems to be a nice vampire, warning Krista that Chase knows of Krista’s attachment to her former self.

But while both those plotlines have some motion this episode, there is no resolution and, for once, the focus of the episode is on Blade (Kirk “Sticky Fingaz” Jones) himself.

The episode opens exactly where the last one ended: Blade storming the obstetrician’s office.  However that plot is quickly (ahem) aborted as Dr. Vonner commits suicide as soon as Blade enters his office.

But as Blade leaves, he is hit by a truck and taken hostage by Reverend Carlyle and three unknown vampires.  Carlyle believes these vampires only want Blade’s serum, and he hopes they will also be able to convince Blade to stop helping ash dealers like Cain.  But the Reverend should know better than to trust three strange vampires, as we see they were only using the Reverend to capture Blade, and once that’s accomplished the vamps quickly kill the Reverend and reveal they don’t care about the serum–the vampires have a personal beef against Blade, for he is their sire.

We learn quite a bit about Blade’s past here.  As a child in the 70’s Blade was hungry and lost and came upon a street gang called the Bad Bloods.  The Bloods took Blade in, but in his hunger he fed on the gang members, turning them all into vampires.  The Bad Bloods became a gang of vampires terrorizing Detroit, feeding on their enemies and innocents alike.  In a bit of a revelation for Blade, we are also finally told the origin of Blade’s trademark tattoos–they are the markings of the Bad Bloods and all the members have them. 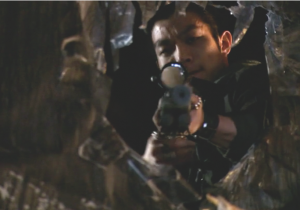 Shen finally gets out of the lair as he has to rescue Blade with this special gun that shoots serum instead of bullets. I don't see a lot of use for that gun, but lucky he had it lying around.

Years later Whistler found Blade and separated the daywalker from the gangs.  But as Blade’s legend grew in the vampire community, all twelve houses began hunting and killing any vampires sired by Blade.  These three Bad Bloods are presumably all that remain alive, and Blood leader Steppin’ Razor  (Bokeem Woodbine) hopes that he can trade Blade to Marcus in exchange for the surviving Bloods being made members of the House of Chthon.

Marcus reluctantly agrees to the deal but before Blade can be delivered he is rescued by Shen, who spent the episode tracking the Bad Bloods.  Shen injects Blade with his needed serum and Blade dusts two of the vampires, though Steppin’ Razor manages to escape.

This plotline had a lot going for it.  We learned a lot more about Blade, why he has his tattoos, and more of what happened to the daywalker before he was found by Whistler.  The story also gives Shen a chance to shine and actually leave the lair and engage in some detecting and some action as he sleuths out who kidnapped Blade, why, and where he is being held.

That said, while I did wonder about Blade’s tattoos, finding out they are gang markings is somewhat unfulfilling.  I had hoped there would be a vampire origin, or mystical origin, to his tattoos, similar to Harry D’Amour for those familiar with Clive Barker’s works.  Instead, they are just gang symbols, and human gang symbols at that.  What a letdown!

Also, while we learned a lot about our hero, there was just too much angst between the Bad Bloods and Blade.  Instead of rage and vengeance, Steppin’ Razor spends too many scenes talking about how they were wronged by Blade, or talking about how they planned their vengeance.  Instead of coming across as dangerous and unpredictable these speeches just make Razor seem like he is all talk.  Because of the poor writing and worse performance by Woodbine, I just wished for things to move along at a faster pace–a feeling that I could apply to this entire series. 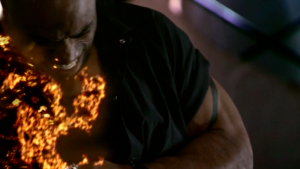 SyFy called. They want their original movies' special effects back.

And when Shen finally broke Blade loose for our few seconds of action this episode, I was struck by the worst effects I’ve seen since perhaps the original pilot.  Just after I praised Blade’s production values last episode, this time I am treated to uncomfortably close camera angles, and special effects that look like they were made on someone’s home Amiga for YouTube.

If the dusting effects weren’t bad enough, this is also the first episode without a gratuitous “titty shot”.  We do get to see the bare ass of Krista’s stunt double as she enters the pool of blood buck naked, but obviously actress Jill Wagner is above showing her breasts for a cable TV show.  And to that I say, good for you girl!  You may not be able to act worth a damn, but this show doesn’t deserve your nipples.  Good for you for recognizing this series for what it is and not allowing your morals to be bent for this.

Still, for all my gripes, my favorite character remains Boone and I hope he makes his way back to Detroit quickly, and with Steppin’ Razor now out there to make things worse for Blade I continue to hope this series may find its footing.  So while I’m not happy with the series, I continue to watch.