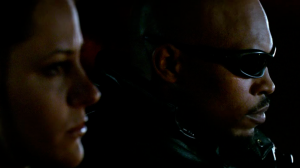 Before I get into this episode’s plot and my thoughts on the continuing series, I want to take a moment to comment on the cinematography of this series.  During the director’s and producer’s commentary for Blade’s pilot episode, they kept discussing the digital high def cameras used for filming the series and I didn’t see the big deal.  They talked about how they could work with existing light, and I didn’t care; I thought they were just talking about cost savings when they should have been focused on character and story.  But in this episode I saw some really great looking use of light, color, and grain (yes, grain in a digital recorder).  I loved the “grim and gritty” look of this series, and the selective use of light really worked for it.  Perhaps it took a handful of episodes for the lighting and camera teams to really understand the power of this camera, perhaps this episode just had a more artistic cinematographer, but in this episode I thought it was one of the better shot things I’d seen lately.  For TV it’s astounding, and even for a film it would have been very well done.

That plus the par-for-television effects give this series some very good production values, which is something I hadn’t commented on before as only in this episode was I really impressed by the series’ technical aspects.

That said, on to today’s episode:  Descent. 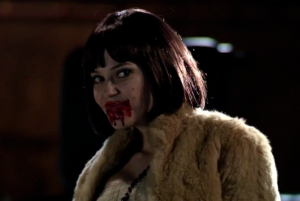 Chase is quite fetching in her disguise for luring in recovering addicts. But is she okay to drive if she's always sucking on drunks?

Krista Starr (Jill Wagner) is recovering from her wound suffered in the last episode, which is healing slower than usual due to her refusal to eat human blood.  Chase (Jessica Gower) takes her out for a night on the prowl, feeding on some hapless AA members.

Krista is also tasked by Blade (Kirk “Sticky Fingaz” Jones) to get a vial of Aurora, the vaccine that makes vampires immune to damage by the usual methods, though it is under lock and key and Krista tries several times unsuccessfully to obtain a sample.

Finally, Krista is tasked by Marcus (Neil Jackson in his only appearance this episode) to deliver a package to a wedding. We are never shown the package’s contents, obviously setting up a larger plot later.  The recipient, a waitress named Vanessa (Sonja Bennett), tells Krista to “thank the doctor” for her.

Blade, meanwhile, has finally tracked down last episode’s target, the ash dealer Cain (Caprica‘s Ryan Kennedy) and grills him for information.  Cain reveals he was the familiar of a vampire named Sands who had been taken hostage and undergone some involuntary experimentation, possibly related to Aurora. 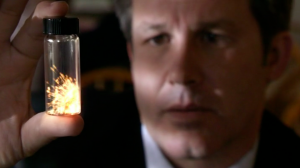 I had never considered what happens to an amputated piece of a vampire when exposed to sunlight, but I suppose it makes sense that it turns to ash, even if it is a tooth.

Once they’ve captured the vampire, Blade, Sands, and Blade’s weaponsmith Shen (Nelson Lee) return to the secret lab where Sands was captive.  There they find several other vampires that were with Shen still trapped in the lab.  While dusting the vamps, Blade finds a scalpel left in one vampire’s body, and Shen is able to track that scalpel to the office of a local doctor.  Blade barges in, expecting a major fight, but finds himself in the office of a gynecologist with a waiting room full of pregnant women.

Finally this episode also focuses on the exploits of crooked-cop-cum-vampire Boone (Bill Mondy), who’s murders in Kansas have garnered the attention of FBI Agent Ray Collins (Larry Poindexter).  Collins discovers Boone’s yanked fang at the murder of a police officer, and matches the fang to a hole in the bag of the burned-out truck from which Boone escaped at the start of the previous episode.  Prints from the truck track to Det. Boone, and Collins watches as the fang dissolves to ash in the sunlight.

In addition to moving the plot along, this episode starts to explore our characters as well.  Blade’s Machiavellian moral ambiguity is explored as Blade endorses the exploits of ash dealer Cain, seeing Cain’s selling of ash (and, thus, creating amputee junkies) as the lesser of two evils when put up against a race of beings that feed on humans.  But despite approving of Cain’s methods, Blade steals some of Cain’s drug money to give to Reverend Carlyle (William MacDonald) who is not a true Reverend but gave himself the title after feeling a calling to help ash addicts.  Carlyle and Blade’s clash over Blade allowing Cain to go free does show that Blade’s methods, while effective, leave many humans to suffer and die in the crossfire of his war on vampires. 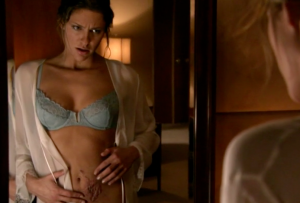 The wound Krista sustained last episode is quickly explained away and forgotten.

While I did enjoy the focus on Blade and his methods, this episode was a mixture of character-piece and filler.  Truthfully, despite my paragraphs above, when the episode ended it felt as if nothing had really happened. Such is the case with television series; sometimes entire episodes are used to get the characters where they need to be for the next episode. Additionally, sometimes budget is such that episodes need to focus more on characters and less on effects and fights.  The result is an episode such as this one, which simply treads water, slightly escalating the situation while really not changing anything.

Were it not for the introduction of Collins, who I’m sure will be a major player later, and perhaps Sands, who lived and thus may return, I would call this episode “useless”.  As it is, while Descent helped to deepen the world Blade, it could barely hold my interest.

Again, it’s virtually impossible to judge a serialized TV series on an episode-by-episode basis.  If the series continues to deliver episodes like this one then it is slipping deep into Not Recommend territory as it simply doesn’t have characters compelling enough to make up for the lack of action; put another way, the series is dull.  But that said, if there is payoff later, it was nice to get to know our main characters a bit better, so I remain optimistic as I enter into Episode 4.

And perhaps best, I still am curious where this is all going and how it will all pay off.  I am excited to watch episode 4, though I’ve not really enjoyed episodes 2 or 3 very much.