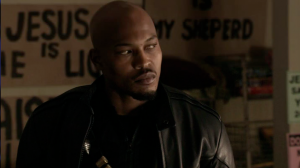 Jones and Wagner compete this episode to see who can give the most one-note performance.

The second episode of the Blade series continues every storyline from the pilot episode, while also introducing many new characters and twists to deepen the plot.

Crooked cop-cum-vampire Det. Boone (Bill Mondy) escapes his shrink-wrapped cage and dusts his fellow captives, on his way back to Detroit to get revenge on high-ranking House of Chthon Vampire Marcus Van Sciver (Neil Jackson), setting up what is sure to be a major showdown later in the series.

Meanwhile, Krista Starr (Jill Wagner) continues to deal with her transformation into a vampire, secretly using Blade’s serum to unsuccessfully quell her vampiric thirst, and her hunger causes her to even dream of feeding on her own mother.  She is both Marcus’ captive and object of desire, as her charismatic maker continues to try to seduce Krista to the dark side.  But Krista continues to play both sides by acting as Blade’s spy, secretly digging deeper into Marcus’ operations and learning of Aurora – the vaccine that makes a vampire impervious to garlic and sunlight. 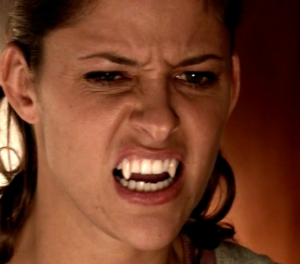 Is it still an Elektra complex if Krista wants to eat her mother?

The Aurora project is in upheaval due to Blade’s interference last episode.  We are introduced to Winston Haupt (Adrian Hough), a leading member of the House of Chthon, when he arrives to ensure Marcus pulls up roots and moves the Aurora experiment from Detroit to the west coast.

As for our titular hero (played by Kirk “Sticky Fingaz” Jones), he is perplexed by his fight with Fritz, the seemingly invulnerable vampire he fought in the pilot.  To investigate how Fritz could be unaffected by garlic and silver, Blade starts hunting down a group of ash-addicts who snort vampire ash to get high.  His investigation leads to an ash dealer named Cain.

Marcus is also seeking Cain.  Cain’s methods of harvesting his product include trapping and murdering vampires, including Winston.  As Marcus looks into Winston’s murder, the trail leads straight to the ash lord.

The climax of the episode comes at Cain’s ash lab–Marcus’ other favorite female vampire Chase (Jessica Gower) is leading a group of vampires, including war-trained Krista, to take out Cain, while Blade has been following one of Caine’s addicts to the lab.  But Cain is one step ahead of Blade, and detonates a bomb in his evacuated lab that kills all of Marcus’ vampire troops except Krista and Chase.

But as Blade is about to finish Chase off, Fritz ignores his orders to stay hidden and crashes a car into the Ash lab, itching for a rematch against the daywalker.  During the fight, Krista’s loyalties are tested.  Blade needs to capture Fritz to study Aurora, but Chase orders her to kill Fritz to keep Aurora’s secrets.  Krista chooses her cover over the information and beheads Fritz, falling on a stake and severely injuring herself in the process. 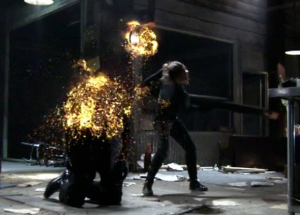 The episode moves along quickly and the rematch between Blade and Fritz is welcome, though the fighting is still quick-cut and poorly choreographed.  It also falls prey to WWE conventions as, for no reason I can fathom, there is a large wire-mesh cage in Cain’s lab, allowing Blade and Fritz to literally have a cage match.

I’m starting to accept Sticky Fingaz more as Blade and I’m actually coming to like Marcus as the charismatic vampire leader.  But Krista’s one-note character, matched by an equally one-note actress, grates on me and makes me have no sympathy for the she-devil.  Several times I wished Chase would just give into her jealousy and stake Krista.

I do like the character of Boone and welcome his return to Detroit.  The actor’s energy really is a great wild card in the series, and his inventive self-mutilation by pulling out his own fang to cut through his body bag and free himself was very well thought out.

And the overall series plot is being revealed as knotted and intricate, and it has my full interest, despite seeming to be a retread of the reaper story in concept.  The House of Chthon is appearing to me like a mob family, and I’m enjoying the internal power struggles as the layers are peeled back for the audience.

The dialogue is also improving, as some lines this episode got a genuine laugh from me, such as when Winston goes to see Mina, a woman who sells vampires to humans as food.  Mina offers up a blonde from Illinois and we get this exchange: 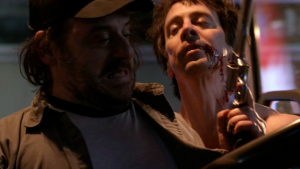 Boone is the most interesting character in this series, so it's a shame he only bookends this episode.

But while the dialogue and overall story seem strong, the pacing is off.  We are being introduced to characters that seem important, such as Mina and Wiston, just to have them die 10 minutes later.  The writers do a poor job of telling us which characters are important and which are merely storytelling devices, and that is a problem.

Also, with the exception of the end fight, the episode is lacking in action.  Instead of the exciting and entertaining wire-fu we got in the Blade films, Blade the TV series is a soap opera for the testosterone set.

While I remain interested, I am by no means enthralled.  Two episodes in, the series is a weak recommend for Blade fans, a not recommend for everyone else.