Warning: the following review contains spoilers for this and the previous episodes of Blade: The Series  You can watch this episode free at thewb.com

Episode Ten opens in a nightclub, and immediately I’m reminded of the original Blade movie (sure they played New Order and this show can only afford heavy metal music in the public domain, but the comparison is still welcome).   Is this a vampire club?  Will Blade (Kirk “Sticky Fingaz” Jones) come in and ash everyone here? 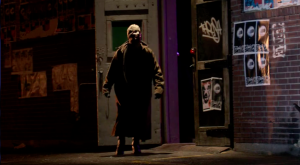 The White Prince - a killer plot that will hook you!

Party girl Jennifer is slipped a rufie and wakes up handcuffed in a dingy basement.  She’s the latest prisoner of The White Prince (Scott Heindl) – a vampire not connected with any of the Houses we’ve seen and has spent centuries feeding on and brutally torturing women.   Like we’re told he cuts open their stomach and dances on their intestines (sadly visions of the guy tilting his head back and doing the Snoopy Dance on a pile of guts are left strictly to our imaginations).  His face scarred from self-inflicted wounds, White Prince dons a poorly sewn mask (think Platinum Dunes Leatherface crossed with the David Cronenberg in Nightbreed) and films himself extracting all of Jennifer’s teeth.

Yes, coming completely out of left field is a stand-alone murder mystery episode that actually plays thing like a straight up horror tale – a rarity for Blade given how often it features action vampire over scary vampire.   And by breaking from the serialized storylines the show now gives new viewers a chance to get hooked.  I cannot imagine flipping through the channels, stumbling upon an episode like last week’s Angels and Demons, and being captivated by the multitude of new characters in a 19th century setting (and Blade himself relegated to a walk-on).  But Hunters is an ideal introduction for viewers late to the Blade series.  It certainly would make my Must-See TV schedule from this point forward (though admittedly we’re catching it two episodes from cancellation).

Another girl named Nicki goes missing, and concerned friend Daniel asks Shen (Nelson Lee) to take the case.  Shen, writing Nicki off as dead, initially refuses until Daniel accuses Shen of being Blade’s lackey who wasn’t so blase when his own sister was in danger.  It’s satisfying to get some character development for this sardonic co-star, and I’m happy to see Shen taking the spotlight this time.  It’s inferred that Shen came to hate vampires after his sister was…bitten? Killed? Abducted?  A thread for a future episode which may never come.

But this is Shen’s case now, with Blade, always up for killing vampires – playing second string.  There’s a great exchange between the two: 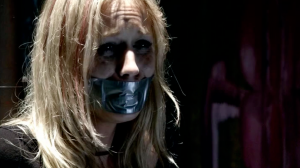 This sets up a good dynamic, showing that Shen is Blade’s conscience as well as his weapons maker.  Perhaps even more important, Blade knows it.

This story continues with some red herrings as Shen and Blade try to find out the identity of the White Prince’s Familiar, whom the men amusingly refer to as “a Renfield” (a nice callback to the original Familiar).  Blade and Shen use Nicki’s sister Bethany as bait, and she’s abducted by bartender Kurt (Dominic Zamprogna) to become the White Prince’s next victim.

I like The White Prince as a concept, but I’m lukewarm on the execution.  How quaint that he uses VHS to videotapes himself torturing the victims.  Sure, age-old vampires may not be up on the latest digital technology but you’d think in 2006 mini-CD or digital would be preferable!  His look worked for me at times.  He wore a stylized coat that actually allowed him to camouflage himself against the wall, and the mask was creepy.  That said, I was disappointed when the eventual unmasking comes. 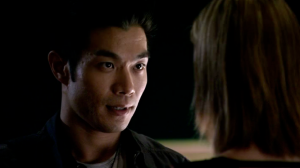 This episode is Shen's chance to shine.

Masks really should serve one of three purposes in horror — 1) hide a killer’s identity so when the killer is revealed we have a shock (Scream); 2) hide something so grotesque we are revolted when we see it (Friday the 13th); 3) be spooky enough on its own that we are terrified (Leatherface).  There should also be an in-story reason for a character to wear a mask, such as trying to hide their own identity, or a psychological defect where the mask allows disassociation of the person from their acts (Michael Myers).

The mask had me guessing the entire episode.  While all signs pointed to the wearer being the White Prince vampire, I started wondering if perhaps it was a human serial killer emulating a famous vampire.  After all, why would a vampire torture rather than feed?  Maybe it’s Detective Boone (Bill Mondy), who is constantly hunted but we haven’t seen since the fifth episode?  Or maybe it’s a minor character from the House of Chthon?  Will it be someone from Blade’s past, or perhaps Shen’s?  Maybe even Shen’s sister?

Nope.. it’s just a vampire with a hang-up over self-inflicted scars.  Wow, what a let-down from what could have been a killer unmasking scene (pun fully intended)!  Blade unmasks and fights the White Prince, ripping the killer’s jaw off before dusting him.

Meanwhile, Shen keeps his focus on rescuing the girls, but is ambushed by Kurt.  This gives Shen a chance to shine in some hand-to-hand combat, and for me to actually be shocked when Shen is not content to just hand Kurt over to authorities after defeating him.  Instead Shen buries a straight razor in Kurt’s stomach and the way it comes off does not play as self-defense but murder.  A wonderfully ironic ending — Kurt helped the Prince so he could be immortal and instead died young. 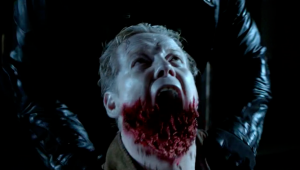 Is the show posing a moral question here, or are we just to take Shen’s killing of Kurt the same way we do Blade dusting the White Prince?  This feels different for some reason, perhaps because Kurt leaves a corpse rather than flaming out in a fake-looking CGI shot.

But all told, it was a satisfying story that focused on our heroes for a change, rather than the villains in the House of Chthon.  A welcome change of pace that becomes only the second episode in the series that I would rate as “good”, and which usurps Sacrifice as my favorite episode of the series.

Hunters does include a few ongoing subplots for long-time viewers, with a B-story involving Krista (Jill Wagner) in detox after her feeding frenzy and copulation with House of Chthon power-player Marcus Van Sciver (Neil Jackson).  Krista has fully rejected Blade’s serum and goes out on the hunt.  Blade quickly captures her, force-injects serum, and makes it clear Krista will get over her bloodlust and return to his side of the war on vampires or Blade will dust her.  There are several scenes of her fighting to get out, eventually breaking down the metal door that contains her and… stays put.  When Shen and Blade return at the very end of the episode, Krista has conquered her bloodlust and is ready to be Blade’s spy in the House of Chthon again.

And speaking of Chthon, in our C level story House elder Charlotte (Emily Hirst) is coaxing Chase (Jessica Gower) to reveal Marcus’ plans.  Of course we know Chase is siding with Marcus against the purebloods when she pretends to align herself with Charlotte and promises delivery of both Marcus and Blade. 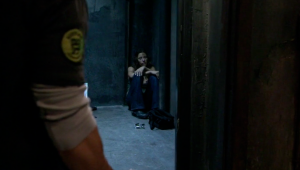 Krista was locked in a room this episode. Can we leave her there?

Mercifully the House of Chthon scenes, especially those featuring piss-poor actress Hirst, are short.  I am growing weary of this plot line that doesn’t hold enough twists to be stretched over a dozen episodes.  I was glad to get confirmation of my suspicion that the baby in a bag from last episode was a snack for Charlotte, who prefers the blood of hours-old newborns.  Ahh, if only she could act she might be a good villain.

For the first time in the series we have no sign of FBI Agent Collins (Larry Poindexter) and his new coroner partner, nor any reference to Boone.  The episode smartly focused on the White Prince story and was the better for it.

Two episodes left to go, I actually find myself hoping for another hour devoted to a self-contained story as fulfilling as the White Prince’s and then a finale wrapping up the House of Chthon/Boone storylines.  But we shall see.