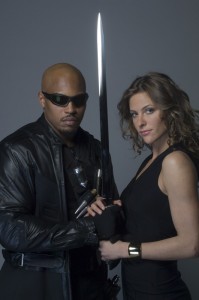 As listeners to the Now Playing podcast know, I am a fan of all three Blade films.  Having the vampire hunter’s adventures continue on a weekly basis was an appealing proposition.  However, I never tuned in during Blade: The Series’ inital run because Spike TV was a cable station best known for lowbrow T&A programming like Manswers and Stripperella.  I ended up buying Blade: The Series for $8 at a closing Suncoast Video.  I knew the series had been cancelled, but wondered what adventures the writers had given the daywalker in his short TV life.  It took Now Playing’s Blade retrospective series for me to finally pull the shrink-wrap off my box set–and I wish I hadn’t.

I was surprised that Blade ended up being a serialized drama series.  I had expected it to be episodic like The Incredible Hulk or The A-Team, with each show pitting Blade against a new nest of “suckheads”.  In previous reviews I compared this series to Angel and Buffy and those were obvious, but smart, models for Executive Producer David Goyer to emulate.  I think it was the right choice to introduce a strong supporting cast of heroes and villains.

But this cast of new characters was not supporting — they were the focus of the series!  This seems to be a Goyer’s trademark, as Blade II and Blade: Trinity also sidelined the daywalker to showcase second stringers.  I thought a series titled Blade would star a character named “Blade”!  But this show would be better off entitled Krista or, were it a hip-hop song, Krista feat. Blade.  He’s just using a brand name to sell Krista’s story, much like Frank Mancuso Jr. did with Friday The 13th: The Series.  As a fan of Blade the character, this series is not what I wanted.  I was blindsided by the House of Chthon drama.  I imagine most Blade fans agree.

I will admit there was some Blade backstory shoehorned into this thing, sometimes more successfully done than others.  Perhaps the plan was to drip little bits of Blade’s arc into a season, but that seems like a mistake.  They scored a major casting coup by getting Richard Roundtree as Blade’s father, but he’s the one given the shaft after five minutes of screentime.

Try as I might, I never could get into Marcus’ conspiracy.   I’ve seen this type of story told better a thousand times.  Trying to make this series as much about a crime family of vampires as about the hunter was a misstep–and from what I can tell a misstep that Goyer never planned to correct.

I fully expected Marcus and the House of Chthon to comprise the entire Season 1 plot, but figured Blade would vanquish them in time to do something new in Season Two.  There are eleven other Houses to explore after all.  But no, Marcus and Chase were still out there to cause problems by season’s end.  Instead of following the Buffy formula, they tried to be Lost.  Well, they did lose! 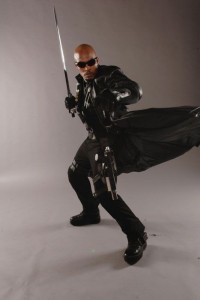 Admittedly, it would have been harder to make Krista an integral part of the plot had the enemy changed.  The show that began with Krista’s brother murdered in cold blood by Marcus, and her conflicting loyalties became the centerpiece of all storylines.  Too bad they trivialized her motivations for revenge with daytime soap opera storylines which had her screwing and possibly falling for the man guilty of the crime she wants to avenge.  If the creators were going to sideline Blade for other characters, they needed to be likable and strong.  Krista does not fill that bill, and while I have been (deservedly) harsh on Jill Wagner’s performance the writers did the character no favors.

I do hold these writers most responsible for the series’ many failings.  They seemed unable to pace the plots.  Characters like Detective Boone and FBI Agent Collins were given lengthy introductions but never get any payoff.  The way these characters were dropped is inexplicable, and frankly embarrassing.

The damning blow was the finale.  Ending on a cliff-hanger where Marcus reveals knowledge of Krista’s betrayal, I should have been incensed that I would never know more.  I think back to other cancelled shows that concluded with cliffhangers – Twin Peaks, The Dead Zone, Lois and Clark, and even Sledge Hammer.   In each of those cases I was furious at the unresolved plots.  I even called ABC executives at 11 p.m. on a Sunday night begging for more Twin Peaks.  With Blade: The Series I didn’t care.  I really didn’t want to see more of Marcus, and I certainly didn’t ever want Krista again.

Series writer Geoff Johns stated in a letter to Wizard Magazine that Blade: The Series was cancelled due to high production costs, not low ratings.  Indeed, Blade’s premiere episode was the most-watched episode in Spike TV’s history.  But those 2.5 million viewers had dwindled to less than 1 million by the time the season finale aired.  I envy those that turned it off.  Truth be told, had Blade been renewed for a second season I wouldn’t have watched.

This show was desperately in need of a (pardon the pun) revamp that curtailed the House of Chthon and brought Blade and his partners to the fore.  It was what worked in the best episode —Hunters, a mostly Krista-free hour where Blade and Shen got a chance to shine pursuing a tough and frightening vampire they vanquished by the end.

So my final advice is to skip Blade: The Series.  While television might have been the right place for the character to nest, this series did not deliver.  Hunters was light enough on the overarching stories that I can recommend that single episode for fans of Blade.  The rest of it deserves to be ashed.  Maybe the upcoming Blade anime series will give our daywalker a proper TV home?