Avengers Assemble in the Toy Aisle! 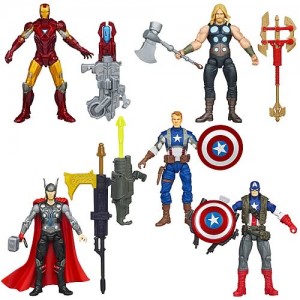 Tomorrow, March 1st, is the official street date for Hasbro’s The Avengers toys.   I thought a run-down of what is shipping in this initial wave may be helpful:

Two Wave 1 figures are shipping with Wave 2, so expect these first two figures to be the most seen on pegs

Then new figures in Wave 2:

One wave of Deluxe Figures is shipping currently with 2 figures in the wave:

These smaller vehicles are not seen in the Avengers movie but add play value to the toys, and come with barely-articulated 3.75″ action figures to pilot the ships

Stark Tek Assault Armor Mechs
3.75″ figures that fit inside much larger armor “mech” suits.  Again, not seen in the movie but added play value
Buy these toys online now at Entertainment Earth
Movie Vehicles
While the big mama, the SHIELD Helicarrier, is still yet to arrive, right now you can get the movie-accurate Quinjet vehicle with an Iron Man figure.
Mini Mighty Muggs
Hasbro’s Mighty Muggs makes a return to store shelves in a smaller Mini Mugg format.  There are 2-packs with comic book depictions of the characters, as well as individually packaged figures from The Avengers film
Individually packaged we have: 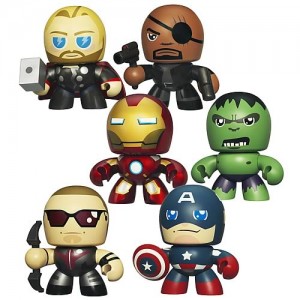 In the two-packs there are:

These figures have a feature that if you squeeze their legs together they perform an action move.  Four are available:

A little larger in size, these figures come with basic articulation and continue the 8″ figure series Hasbro has done for the past three years.  In the initial shipments we have:

These figures have some articulation, talk when you press their body, and also have an action feature that usually involves throwing something.  Except for Hulk.  Hulk smashes.  In this line you have:

If you prefer your figures smaller, Hasbro also has 2-inch pre-posed figures for the Avengers.  In this line is

Also a continuation of their toys going back to Iron Man 2 these toys feature Avengers on wheeled vehicles.  The two seen right now are:

Plus a bevvy of other toys such as a Nerf Hawkeye Bow, Hero Masks, foam Hulk Hands, Iron Man play repulsors and too many other items to list!

Most all of these items have been spotted at Wal-Mart, Target, and Toys R Us stores nationwide, so keep this checklist handy as you shop!

See an item we missed?  E-mail us and let us know!

Listen to the Marvelicious Toys podcast discussing Avengers and other Marvel action figures, statues, and collectibles!

Update 3/1:  There are three figures that have been reported since our original post!  Figure 012 – Loki has been found on store shelves, plus there are two variant figures:  04 – Captain America has a mask-less variant, and 06 – Thor has an unhelmeted variant, so keep an eye out for those on pegs!