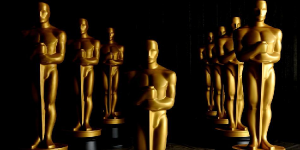 Though the time has come to join the fray on handicapping this Sunday’s Academy Awards, it must be stated right off the bat that my Oscar losing streak is almost as long as Martin Scorsese’s.  I haven’t won a single betting pool for this show since I first anted up my piggy bank with family during the 1991 telecast (when I was dead certain that Bugsy would beat Silence of the Lambs for Best Picture).

Some years my Oscar hopes were dashed by an unpredictable dark horse – Marissa Tomei’s surprise My Cousin Vinny win or Shakespeare in Love besting shoo-in Saving Private Ryan.  For sweep years like Titanic, where every participant had the same picks, it all came down to the lucky guesser of an obscure category like Best Documentary Short.  And then sometimes I just get an idea in my head about what I think Academy members respect and become blind to reason.  Just ask Arnie… he made $100 off me after I foolishly gambled on Burt Reynolds’ Boogie Nights performance trouncing Robin Williams’ Oscar-baiting work in Good Will Hunting.  (In my defense, the man was coming off Flubber!)

So don’t take anything you’re about to read as a proven formula for predicting winners.  My method is to break each of the 24 major categories into three possible outcomes:   Losers (no need for these folks to prepare a speech… it just ain’t happening this year), Outliers (unlikely dark horses that could sneak out a win), and The Real Race (those that have the best shot at the Gold Guy).  I’m usually pretty good at this stuff.  It’s when I have to narrow the field to one Winner that I choke.  My tendency is to use my head and not my heart – I never think my personal favorites are going to be victorious.  It’s the person who throws out cynical ideas about the Academy’s tastes, and banks on the undeniable appeal of some movie or performance that doesn’t have frontrunner status, who usually takes home the winnings.

Academy members’ tastes may be a bit stodgy – they tend to shun works that are too artsy, gutsy, or violent.  And they hate giving Spielberg anything that isn’t connected to WWII.  But that may all change this weekend.  The history of the Oscars is not the history of the best films ever made, but it is a compelling Hollywood self-portrait that always has the potential to surprise and delight.  And if Scorsese now has a statue, maybe this is the year where I turn my fortune around.  Here’s hoping the 2013 Winners are….

Losers: Ben Zeitlin (Beasts Of The Southern Wild)
Outliers: David O Russell (Silver Linings Playbook) & Michael Haneke (Amour)
The Real Race: Steven Spielberg (Lincoln) vs Ang Lee (Life of Pi)
The Winner: Spielberg.  But Ben Affleck would easily take any of these names if he were on the ballot

Best Actor:
Losers: Everyone else
The Winner: Daniel Day Lewis.  This is the only race I’d bet $100 on.

Best Actress:
Losers: Naomi Watts (The Impossible) & the little girl with the unpronounceable name from Beasts of the Southern Wild
Outlier: Jessica Chastain (Zero Dark Thirty)
The Real Race: Jennifer Lawrence (Silver Linings Playbook) vs. Emmanuelle Riva (Amour)
The Winner: Lawrence had a big year with this and Hunger Games.  Plus Silver Linings probably won’t win anything else.

Best Supporting Actress:
Losers: Amy Adams (The Master), Helen Hunt (The Sessions), & Jacki Weaver (Silver Linings Playbook)
The Real Race: Anne Hathaway vs. Sally Field
The Winner: Hathaway.  Ask Jennifer Hudson if one big song can get you this statue.  Plus Sally already has two of these.

Best Original Script:
Losers: Moonrise Kingdom & Flight
Outlier: Amour
The Real Race: Django Unchained vs. Zero Dark 30
The Winner: Zero Dark 30.  As controversial as the torture was in this film, it pales next to Q’s irreverent slant on slavery.

Best Adapted Script:
Losers: Beasts of the Southern Wild
Outliers: Silver Linings Playbook & Life of Pi
The Real Race: Argo vs Lincoln
The Winner: Lincoln.  Both movies fudged history to contrive drama… but Tony Kushner had the harder job because there were no firsthand accounts to model.

Best Cinematography
Losers: Anna Karenina & Django Unchained
Outlier: Lincoln
The Real Race: Life of Pi vs. Skyfall
The Winner: Skyfall.  Roger Deakins must win one year… and this may be his best looking film.

Best Production Design
Outlier: Hobbit
The Real Race: Anna Karenina vs. Lincoln vs. Les Miz vs. Life of Pi
The Winner: Lincoln.  This category is really up for grabs, but I’ll go with the film with the most nominations.

Best Make-Up
Loser: Les Miz (I couldn’t stand looking at all those rotten teeth and wigs in close up!)
Outlier: Hitchcock
Winner: Hobbit
Best Visual Effects
Loser: Snow White And The Huntsman
Outlier: Prometheus
The Real Race: The Avengers vs. The Hobbit vs. Life of Pi
The Winner: Life of Pi.  All deserve it, but Pi’s SFX were pivotal to the drama.

Best Animated Short
Loser: Fresh Guacamole
Outliers: Head over Heels & The Longest Daycare (could the Simpsons ever win an Oscar?)
The Real Race: Adam and Dog vs Paperman
The Winner: Paperman.  It won the Annie

Best Live Action Short
Losers: Buzkashi Boys & Henry
Outlier: Asad
The Real Race: Curfew vs. Death of a Shadow
The Winner: Curfew.  I’ll be honest… I Googled a bunch of other Oscar handicappers and this was consistently voted the best.

Best Foreign Language Film
Loser: A Royal Affair & War Witch
Outliers: Kon Tiki & No
The Winner:  Amour.  If it’s up for Best Picture, winning this category should be a ake walk.