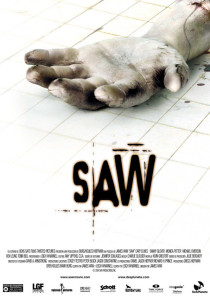 During the last decade, much of our national conversation was centered on torture, both in current events and entertainment.

With torture surrounding us in real life why would audiences pay money to see make-believe torment on screen? I think Americans are comfortable taking horrible scenarios and making them “safe” through fiction. During the September 11 attacks we heard stories about people so panicked by the oncoming fire that they jumped from the high windows of the Twin Towers. Their terrible choice was a nightmare for our nation, that thought of having to either burn or leap to your death. Yet with films like Saw writers and directors took that same life-or-death choice and, because it was a movie, made it safe.

With these films we in the audience could both sympathize with the tortured, while also desensitizing ourselves to the acts on screen.

Perhaps we needed fictional torture to help us accept what the nation was experiencing?

Or perhaps we just wanted to push the boundaries of experience a little further through film?

I know I was looking for something new in horror. After 1999’s successful The Blair Witch Project it seemed Hollywood was smitten with low-budget ghost stories. Recycled J-Horror found success, praised by audiences and critics. I saw those films, but I continued to seek something more; something that was more dangerous than a PG-13 rating would allow, a movie that would push my boundaries the way Hellbound: Hellraiser II had in the 1980s. I wanted more than a bit of spooky suspense found in films like The Ring and The Grudge. I wanted a visceral feeling of life stretched to its most extreme limit.

I had no idea that’s what I would find when I watched Saw. 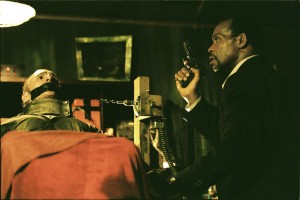 Danny Glover is getting too old for Jigsaw’s shit.

The film was low-budget — barely more than $1 million — and made by filmmakers who were inspired by the scares Blair Witch delivered, despite that film’s smaller cast and even smaller cost. Saw creators James Wan and Leigh Whannell started by making a 30 minute proof-of-concept film. Its effectiveness helped them raise the money they needed to hire a cast of accomplished actors, including Danny Glover and Cary Elwes.

The story seems simple enough — two men are chained up together in a room, and a dead body separates them. They must uncover clues, or saw off their own feet, to escape. Yet, while keeping a small scope, Whannell’s script created the first iconic horror villain of the 21st Century: “Jigsaw” John Kramer. Played by Tobin Bell, Kramer was a man dying of cancer. With little time remaining he begins to set intricate traps for people to help them live the rest of their life to the fullest — or die trying to escape.

As Jakob, Marjorie, and I mentioned in our 2009 Saw Retrospective Series, the concept of Jigsaw was not terribly original. This mastermind is merely an iteration of John Doe from Seven, but with a dash of the self-fulfillment agenda of Fight Club’s Tyler Durden. After all, Jigsaw’s trap of making a suicidal man cut himself is not that different than John Doe’s punishment for “Lust”; death by intercourse with a bladed phallus.

Yet, despite the similarities, there is one key difference:  in Seven we found almost all of John Doe’s victims after the fact. When Seven‘s main characters, two police detectives, discover “Sloth” he’s already wasted away, and “Pride” is already dead. In Saw the cast has expanded; our main characters are the victims of the trap and we get to watch them faced with their tests. 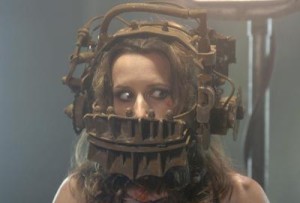 More than just the two men in the room, the story grows to include more victims. Even for those introduced after an encounter with Jigsaw we still get to witness their torment in flashback. These scenes are myriad, from a woman in an iron collar that will tear her skull apart to a man, covered in napalm, having to hold a candle to read writing on a wall.

It’s not just that these victims were going to die in brutal ways (that was de rigueur for horror films since The Texas Chain Saw Massacre), but Saw upped the stakes by combining the suspense of impending horror. It was no longer just a killer behind the door, now there is a ticking clock and when it reaches zero someone will die, and in their last seconds they will harm themselves or others trying to escape.

These types of torment made waterboarding actually seem safe!

The best part of it was that I was repeatedly asking the question: what would I do in those situations? Would I be able to cut off my own foot to escape a room? Could I kill a man in cold blood if the result was saving my own life? Could I take the pain of the razor cuts and escape the other side? And the absolute worst: could I shove both my hands in a shit-filled toilet to try and find a key?

Yet, a decade later I look back and wonder if subconsciously I made the connection between Elwes’ character, chained in a dirty shit-filled room, with those held in Guantanamo Bay. Neither the fictional character nor the real prisoner know if they will ever see daylight again, and both undergo horrible experiences before it ends… however it ends. 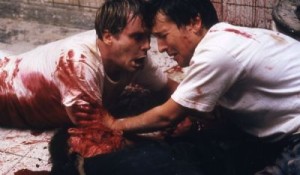 Leaving that theater in 2004 I thought Saw wasn’t actually very good, but that’s because I was focusing on the plot (and the various holes it contained). Yet the images of the people in their torment stuck with me for quite some time.

More, as I previously stated, this film’s success created a new horror sub-genre, combining elements of the classic splatter film with the tropes of the slasher horror, yet drawing out the kill scenes in new and inventive ways. From the six Saw sequels to the Hostel films to The Collector to Turistas; each provided a new type of terrible vicarious experience. Truly the most extreme example in this sub-genre must be The Human Centipede — a film that I rejected in concept, but once its torture porn roots came through in the trailer I knew I was in for a treat.

But the genre burned out quickly. By 2009 Saw was clearly over, the sixth installment in the franchise losing a box office battle with the micro-budget found footage film Paranormal Activity. While a few more films, such as Saw: The Final Chapter and Human Centipede II were still to come, the election of President Barack Obama brought with it a shift in media attention away from Guantanamo Bay. That could be coincidence, but it seems more a causation — by the end of the decade humans were tired of facing torture, real or imagined, and preferred supernatural scares on screen. Their votes for political office matched their dollars spent at the box office.