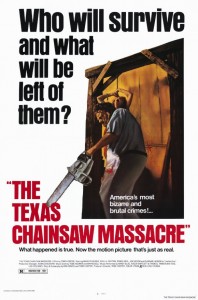 I was born in 1974, and if my parents took me to a movie that year I have no memory of the trip. In the 40 years since, I’ve caught up on many of the classics from that year such as The Godfather Part II, Blazing SaddlesThe Conversation, and Young Frankenstein. But, truthfully, none of those pictures shaped my life nearly as much as the small indie film The Texas Chain Saw Massacre.

Of course, I didn’t see this film in its original release. I was only 19 days old when Texas Chain Saw hit theaters.  And while my parents were pretty lax with the content of movies I watched or books I read, even they would have had serious concerns about my watching teens carved up for food.  I got into true, hard R-rated horror films when I turned 12, and the constant Chain Saw references in the 1987 Mark Harmon film Summer School had me finally rent this grindhouse film on VHS.

I had built Leatherface up in my mind as a Freddy, a Jason, or a Michael Myers.  But, in truth, Leatherface had none of the slick, commercial appeal of those later imitators.  As such, the film was less fun for me as a teen.  I later returned to Texas Chain Saw in 2010 for Now Playing Podcast’s retrospective series and, to the shock of many listeners, I gave it a red arrow.  The cacophonic score, annoying performances, and dirty, low-budget look of the film still made it a movie I couldn’t enjoy.  I labeled it “horror homework” — great for aficionados of the genre but not a film I’d recommend for the masses.

But while I may not recommend watching the film I truly recognize there are few films more important than this.  It is no exaggeration to say that without The Texas Chain Saw Massacre the horror films I love may never have come to be.
First, Texas Chain Saw was a hugely successful film, costing only $300,000 to make and grossing over $30 million at the US box office (which, per BoxOfficeMojo is more than $131 million adjusted for inflation).  This showed studios that inexpensive horror films could make bank. 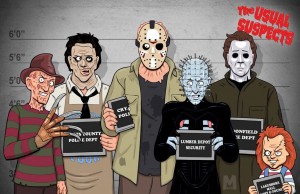 In addition to showing studios a pathway to profit, Texas Chain Saw also inspired screenwriters and directors.  This film, along with Alfred Hitchcock’s Psycho,  provided a template for the “slasher” sub-genre of film, combining a masked killer with an iconic weapon  Later horror films like Halloween, Friday the 13th, A Nightmare on Elm Street, and even Scream and I Know What You Did Last Summer, all series that I love, took this formula and refined it for even greater success.  And Leatherface’s greatest successor may just be Hannibal Lecter, another cinematic cannibal that has captured my imagination.

More, this film launched director Tobe Hooper into the spotlight, paving the way for him to direct Poltergeist, another seminal horror film of the haunted house variety.  (And yes, we discussed how much influence Hooper had on Poltergeist in Now Playing Podcast’s 2011 Spring Donation Drive.  Those podcasts are no longer available.)

While this film doesn’t click with me as entertainment, I credit Texas Chain Saw for paving the way for later horror films I love. This film was born the same time I was, and without it I would not be the man, or the movie critic, I am today.

I do, however, stand by that red arrow. As I found out when I was 13, this isn’t a film I can recommend for those looking for the same glossy thrill given by Friday the 13th Part VI.  It is not a Hollywood production and it shows.  But while I can’t recommend it, I love it for the future films it enabled.