I wrote at length about the summer blockbuster in the 1975 installment of this retrospective series discussing Jaws. I recalled how it seemed each year had one movie that everyone was talking about. Hollywood now gives its tentpole pictures one or two weeks to make an impact, but when I was a kid the biggest films ran for months and would remain in the public conversation for years.

In 1981 I learned what it was like to be on the outside of that conversation.

I spent a lot of time at the movies as a kid. I remember a summer program in our town that screened older, child-friendly films each week for just $1 — a small price for my mother to pay to have me sit quietly for two hours.  My mother, my godmother, and my sister would coordinate schedules to take me to see those summer films and, being the completist that I am, I refused to miss a single installment.

Not content with the preprogrammed children’s fare, I started to make my own decisions about which new releases I would see. I remember begging my mother to take me to Clash of the Titans, The Great Muppet Caper, Superman II, and The Fox and the Hound.  But one film that totally escaped my attention was Raiders of the Lost Ark.

By the summer of ‘81 Steven Spielberg was already a name-brand director with blockbusters Jaws and Close Encounters of the Third Kind under his belt. He’d survived a rare misstep with the ill-conceived 1979 comedy 1941 and returned to form two years later with the first installment in the Indiana Jones franchise.

This film carried more than just Spielberg’s golden name. The poster boasted “From the creators of Jaws and Star Wars.” It was Spielberg’s collaboration with the man who had made the most successful film of all time… George Lucas.

With those names on the poster it is no shock that moviegoers turned out in droves to see the film, with no misgivings about its period setting — a far cry from the filmmakers’ recent science-fiction fare. Plus Raiders wisely featured a strong supernatural bent for those who appreciated the fantastical elements of Close Encounters and Star Wars.

Raiders of the Lost Ark went on to become the top-grossing film of 1981. It was a cultural smash, a critical darling, and nominated for several Academy Awards.

I totally missed it.

The first Indiana Jones movie opened in our town on June 12 — the same day as Clash of the Titans. I didn’t just choose to see Greek gods over Indiana Jones, I have no memory of knowing Raiders of the Lost Ark was out there. Soon after, Superman II opened, and that was the movie I’d been waiting to see.

Raiders was totally lost on me.

When school resumed that fall it didn’t take long for me to realize I’d missed something huge. Now a second-grader, I returned to classrooms ready to reunite with schoolyard friends and talk about Clash of the Titans and Superman II, but the only movie on their minds starred some guy with a whip.  Playground chums regaled me with tales of the swordsman who performed deft moves only to be quickly shot dead, and that magical box that made Nazi faces melt. I had nothing to add to these conversations, I could only nod and say it sounded fun. 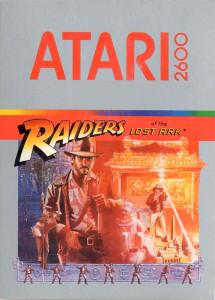 This feeling of isolation continued for years, and I felt Raiders of the Lost Ark would taunt me forever. For Christmas in 1982 my sister Susan bought me the Raiders of the Lost Ark Atari 2600 game. She was now a college student and assumed I’d seen the film and loved it.  I played that game for days, trying to use it as a surrogate for the movies I’d missed. I created a story in my mind featuring snakes and whips and anchs and black markets.

Finally, the next year, my long nightmare ended.

In late 1982 my family bought our first VCR and, a few months later, we rented Raiders of the Lost Ark on VHS. Of course, I loved the film (and was surprisingly happy to see how little it resembled its Atari counterpart). It was exciting and funny, and also a bit scary.  I had nightmares for months about those melting faces.  Though I would rewatch Raiders regularly on video, for the first year or more I would cover my own eyes during the bloody climax.

Then, in 1984, when Indiana Jones and the Temple of Doom was released, I ensured I didn’t make the same mistake — I saw the sequel twice on opening weekend and read the novelization.

I still watch Raiders of the Lost Ark regularly to this day (though I now laugh at the effects that made me wince as a child).  Just this past summer I went on a fishing trip with friends and we gathered around the cabin’s small television to watch Harrison Ford in his second-best role. We applauded its genius, debated the importance of Indy in the movie’s plot, and lamented the franchise’s abysmal fourth installment. 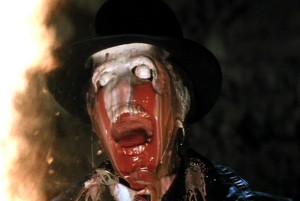 Raiders of the Lost Ark was the best film of 1981, but it also taught me the importance of cinema as part of a cultural conversation. Shared experience creates a community, and in the 1980s part of our nationwide identity was defined by blockbuster films. National defense programs were named after sci-fi flicks, presidential candidates quoted hit movies, and playground friendships were made and broken by what you saw over summer vacation.

I do feel that today some of the magic is lost when there is a new “must see” movie every weekend. It waters down the experience. Now there are more fractured groups of fans, and rarely is there a film like Titanic, Star Wars, E.T., or Raiders of the Lost Ark that can transcend age, race, and gender and become a cultural phenomenon.

At 6 years old I learned how important that was, thanks to Raiders, and it’s a belief I hold today.