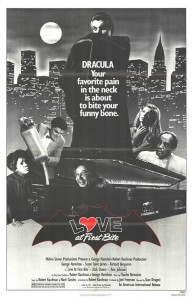 It’s not easy to choose a favorite film from 1979 — so many of that year’s films have influenced my life in one way or another, from The Muppet Movie, which solidified a love for the older-skewing Muppets, to Alien, which scared the pants off me (and Sigourney Weaver), to The Jerk (which may be Steve Martin’s finest ludicrous performance). And I cannot leave out Francis Ford Coppola’s mad masterpiece Apocalypse Now, which is certainly the most engaging and best-made film from 1979.

But while I always enjoy getting lost in the jungles of Coppola’s Vietnam, I didn’t see the film until adulthood, and it hasn’t shaped my life or my views.

The movie that did was a little George Hamilton horror spoof, Love At First Bite.  The story tells of Dracula (George Hamilton) coming to (then) modern-day New York City to find his true love Mina Harker, who has been reincarnated as supermodel Cindy (Susan Saint James).  His quest is thwarted by Cindy’s psychiatrist boyfriend Jeffrey Rosenberg (Richard Benjamin), who also just happens to be a descendant of Dracula’s nemesis van Helsing.

Barely in first grade, I was probably far too young to be watching Love At First Bite. I was too naieve to really understand all the references to the swinging seventies, and the meaning of the word “kinky.”  More, the social commentary about urban youth rehabilitation, psychiatry, and religion was all mostly lost on me.

Yet I was enraptured by this movie.  As I have mentioned in previous reviews, I have always been fascinated by horror. I was mesmerized by trailers on television for movies like Friday the 13th and Evil Dead. It was as if seeing them would be like reading from the Necronomicon itself, opening me to a world of demons and monsters. To an imaginative young boy that thought is rapturous, and terrifying.  I would watch horror films through slatted fingers; I could not bear to see the monsters but I also could not look away. The few times I would try to watch horror films — including Frank Langella’s Dracula from this same year — I needed an adult nearby to protect me from the “evil” radiating from the screen.

But in Love at First Bite — here was a Dracula I could handle. Hamilton was sharing the screen with familiar faces like George and Weezie Jefferson (Sherman Hemsley and Isabel Sanford, respectively). He didn’t want to slaughter innocents, he wanted to be reunited with his centuries-old-love! He wasn’t turning people into ghastly, zombie-like minions, he was feeding on winos and getting drunk off their blood! I understood this Dracula to be silly.

Now, just because I thought he was funny didn’t mean I wasn’t also in awe of Dracula, his immortality and powers. His magical ability to transform into bats and dogs, and his thirst for blood, still held me in thrall. The movie didn’t intend it, but I must admit, I was slightly afraid of George Hamilton’s Dracula.

This was a movie that made horror accessible to a 6-year-old. It was the stepping stone for me between Sesame Street’s Count (always my favorite Muppet, as I secretly hoped one day he’d count the other Muppets on which he’d fed) and true horror killers like Freddy and Jason. I especially liked the crazy antics of Arte Johnson as Dracula’s servant Renfield, the actor throwing himself into the role with wild abandon. 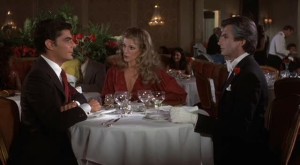 I have since revisited Love at First Bite and can see its many flaws. The film is very much a product of its time.  It’s a desperate Mel Brooks wannabe, attempting to be a vampire version of Young Frankenstein, but, strangely, adds the racist humor of Blazing Saddles. The jokes are dated and most don’t hold up, the effects are shoddy and obvious, and while the score is amazing, the best song in the movie — Alicia Bridges’ “I Love the Nightlife” — has been cut from home video releases due to rights issues.  Still, some of the Dracula jokes, such as “Creatures of the night….shut up!” still make me giggle.  Revisiting Love at First Bite in 2014 was not a rewarding experience and if this were a review for Now Playing Podcast, I’d struggle with giving it a recommend.

Yet this film helped me accept a dichotomy in my own mind that monsters could be frightening and alluring. Just as I was repulsed by — yet drawn to — horror films, Cindy was drawn to — yet frightened by — her undead on-screen lover. The fine line between terror and turn-on was revealed to me. It’s something I’d explore further in Hellraiser, but I recognize that I was first exposed to it by Love at First Bite.

In the 30-some years since I have read Bram Stoker’s original novel and watched countless versions of the quintessential vampire on screen, but when I think of Dracula, it’s George Hamilton that I picture in my mind. So for that long-lasting bite this film gave me, it is the film from 1979 that I remember most.