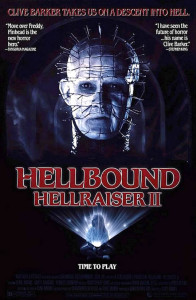 When I was young I was scared of horror. Not horror films, mind you, but the actual concept of horror petrified me. I mentioned in my earlier article discussing 1979’s Love at First Bite that even watching Dracula on television required an adult be home to protect me.

Yet, I was curious… I wanted to see it while I was frightened of what I might find.

The best analogy I can use for my view of horror is, indeed, the Lament Configuration puzzle box featured in the Hellraiser movies. I was a voyager seeking forbidden knowledge, but once the box was opened the pleasures, and terrors, inside would forever be unleashed. If I watched a horror film the hooks would be in my flesh, and what I would see were images relegated to the domain of nightmare.

I wanted to go there, but I took tentative steps over several years. As a very young child I stuck mostly to the safe horrors of Scooby-Doo ghosts and the seemingly supernatural mysteries in The Three Investigators young adult novels. At age 7 I tried to stretch my own limits by leaving the safety nets of kiddie fare behind and attempting to endure adult horror.

I saw The Shining on television in the early 1980s and was petrified by the decaying woman in the bathtub. I watched Frank Langella in Dracula around the same time. I would see ads for horror films like Return of the Living Dead, Friday the 13th, and Psycho III, read the reviews, and talk endlessly about them with classmates. 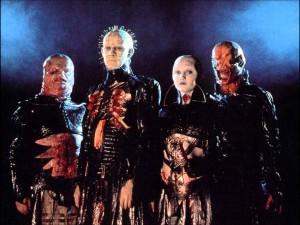 Like the cenobites I too wanted to explore the further regions of horror.

Finally, when I was 8 years old, I tried to face horror. I came home from school one day to find our hosted teenage exchange students were watching Friday the 13th on the VCR. My afterschool ritual was to watch a movie, often Star Wars or Grease, but these Brazilians had monopolized the machine. I was not going to change my routine, so if I could not pick the movie then I would just watch theirs. Not five minutes passed before I saw Mrs. Voorhees decapitated and I fled the room.

That image haunted me for years.

But as I grew into adolescence I wanted to stretch my boundaries further, and I did, starting with horror novels. I found the page safer than the screen, as the written word was always limited by the boundaries of my own imagination. I went further at age 12 and had my first horror movie marathon with the A Nightmare on Elm Street 1 and 2. While I did have a few nightmares of my own I loved every minute of it. I immediately started to consume all the horror I could, reading Fangoria magazine and watching more Stephen King films, the Friday the 13th series, Child’s Play, The Lost Boys, and more.

Within a year I was still captivated, but also starting to bore of the same routine. The vast majority of horror films I watched were slashers, each starring a new group of stereotypical teen characters taken to the slaughter. I had entered the realm of horror to stretch my boundaries, but I just found the same stories again and again. I had faced those fears and I wanted more. I wanted to be tested anew.

Then came Hellbound: Hellraiser II. I had known about the original Hellraiser from the ads. Stephen King’s words were put on the movie screen in a giant font: “I have seen the future of horror and his name is Clive Barker.” Trailers for the first Hellraiser raised my curiosity but the film never came to my town. In 1988, before I’d even had a chance to see Hellraiser on video, its sequel Hellbound came to theaters. The monstrous-looking Cenobites graced the poster. In the movie these creatures described themselves as, “Explorers in the further regions of experience. Demons to some, angels to others.” They were just what I wanted.

Being only 13, I couldn’t find any adult foolish enough to take me to see Hellbound. My parents were lax and would buy me tickets to A Nightmare on Elm Street films, but something about the Hellraiser series made them nervous. I had to wait for video, but the day Hellbound hit VHS I rented it and its predecessor.

I don’t know what I expected the movie to be, but my memory was of fevered excitement. I was going to see something forbidden; I expected something akin to a snuff film. I expected to be changed. 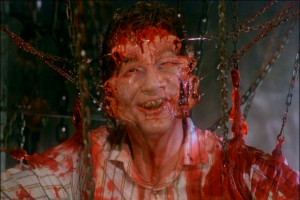 I wanted extreme…I got it. This was one of the first frames I saw of Hellraiser.

By complete accident I put Hellbound in the VCR first and it opened with a montage of the goriest, scariest scenes from the first film. I saw Larry (Andrew Robinson), his flesh stretched by hooks on chains. His distended face leaked more than just blood, and he slurred a blasphemous “Jesus… wept” before exploding into chunks of flesh.

I had found exactly what I wanted in that damned puzzle box.

Eventually the opening credits started and I hit “stop” so I could watch the films in the correct order. I realized that this was not a Faces of Death-type snuff film but rather a mostly conventional horror film with a crazy woman seducing men and then killing them. Still, I had found a horror more pure, and more imaginative, than even Freddy. Pinhead and his varied demonic cohorts were immortal evil incarnate.

The first film had the better gore, but the second expanded the world further. In Hellbound we got to see the creation of a cenobite and travel to their labyrinthine realm; all taking place in an insane asylum — the heart of madness.

Yet the entire mad experience was accompanied by an amazing orchestral score by Christopher Young.  From the disarming lullaby that played when the box was opened to the crescendos that sound like the soundtrack for the end of days, Young’s score stuck with me every bit as much as the latex work.  I was no fan of Young’s given his “whale song” music for A Nightmare on Elm Street 2: Freddy’s Revenge but he redeemed by Hellraiser.  I’ve still not heard a score he’s done better.

In the years since seeing Hellbound I have encountered many horror fans who claim the original Hellraiser is the only one worth watching. I disagree. Perhaps it was because I experienced them as a double-feature, prompted by the marketing for Hellbound, but I see the first two Hellraiser films as parts of a whole. 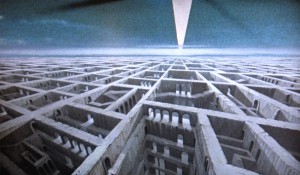 The matte work may not be cutting edge but Hellbound expanded the mythology of the Hellraiser franchise.

Yes, the first movie had a more visceral feel, but it also had long scenes of Kirsty Cotton (Ashley Lawrence) walking the streets of London. The sequel truly fulfilled Kirsty’s character arc and allowed her to escape the madness forever, or at least until the direct-to-video Hellraiser VI.

After seeing Hellraiser and Hellbound I felt I had gone to the limits of horror. I tried to explore further by reading Clive Barker’s books and seeing his follow-up films Nightbreed and Lord of Illusions. They couldn’t live up to the horrors of Hellraiser.

Repeatedly I’ve felt that Barker is the man who comes closest to taking the terror of nightmares and putting it on the page or screen, but he always falls just short.

For more than a decade the Hellraiser duology would be my bar for terror and horror, and they are both films I appreciate to this day.

I continue to try and find new boundaries to push in every aspect of life. I find contentment to be equal to death and I want to be pushed further. In the 25 years since first seeing Hellbound I’ve discovered films that grossed me out more (Human Centipede comes to mind), but none that felt as forbidden as the first two Hellraiser films.

I will continue to find the next cinematic puzzle box, and when I find it I’ll open it without hesitation.