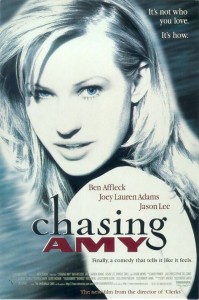 Kevin Smith is a polarizing figure in cinema. The director certainly has his legion of fans, and having attended several conventions with Smith as a featured guest, it seems those fans are mostly male, mostly under 30, and very willing to connect with his characters; lovable losers such as Clerks’ Randall and Dante (Brian O’Halloran and Jeff Anderson, respectively).

I am not in Smith’s camp, and on Now Playing Podcast I have repeatedly expressed my disdain for his body of work.

Yet allow me in this entry of The 40-Year-Old Critic to praise Smith’s best film, 1997’s Chasing Amy.

Amy (as some fans refer to it) was Smith’s third picture. The director was a Sundance phenom with his black-and-white debut (the aforementioned Clerks) in 1994. It did well in theaters and truly found its audience on video — an audience that included me. Thanks to Quentin Tarantino and Reservoir Dogs, I was paying more attention to indie films, especially those heavily promoted by Miramax. As such, I saw Clerks on VHS and enjoyed it.

As I mentioned in my review of Leaving Las Vegas, around this time in my life I was underemployed and frustrated with my lack of career options, so I related heavily to Dante in Clerks. Plus, I was enraptured by the raunchy jokes. Smith raised the bar on profanity with language that originally earned his film an NC-17 rating. As I did with Beverly Hills Cop before it, I laughed loud and hard at Clerks’ envelope-pushing comedy.

Smith parlayed that success into a studio picture, 1995’s Mallrats. The director spent $6 million of Universal Studios’ money on a movie that barely made one-third that amount. Even as a fan of Clerks I thought Mallrats was too cartoonish, too broad. With new lead duo Brodie Bruce and T.S. Quint (Jason Lee and Jeremy London, respectively), Mallrats tried to replicate the bromance of Clerks in a way that felt forced. More, it seemed Smith’s signature characters of Jay (Jason Mewes) and Silent Bob (Smith himself) would not work in color.

Mallrats would not be Smith’s last failure, but it may be his most fortuitous. First, it established his relationship with Ben Affleck, who had a minor role. Second, after Mallrats Smith returned to his “comfort zone” of small, indie filmmaking. On a $250,000 budget — extraordinarily low but still 10 times that of Clerks — Smith wrote and directed Chasing Amy.

By 1997 I was fully indoctrinated into the Cult of Kevin — as rabid a fanboy as any he’s had. I participated in his online message boards and I watched his first two films regularly (and convinced myself Mallrats wasn’t that bad… it is). Whatever Smith made next I would see. Yet the plot of Chasing Amy I found particularly interesting.

Alyssa (Adams) literally comes between Holden and Banky in this scene.

To me, the film seemed to be jumping on the bandwagon of “queer cinema” which had started to gain steam in the mid 90s. While mainstream Hollywood acknowledged gay characters in movies like Philadelphia and The Birdcage, it was really indie films that brought them to the fore, with such groundbreaking fare as My Own Private Idaho, The Crying Game, and Kiss Me, Guido.

Specifically, I saw in Chasing Amy echoes of Guinevere Turner’s Go Fish — a film Smith acknowledges as inspiration. Sexual preference felt like an exciting new frontier for films to tackle and, having seen all the ones I just mentioned, I likely would have seen Amy even with a complete unknown behind the camera.

I was actually a bit nervous to see Smith tackling LGBT topics. This was a straight man with a penchant for raunchy humor. In Clerks, for example, lead character Dante slut-shamed and dumped his girlfriend after finding out her sexual history. I wondered if Smith would use Alyssa’s sexuality as a source of humor, or to titillate his built-in male audience.

I was happily wrong. Chasing Amy is an exquisite balance of comedy and drama. The start of the film is right in line with Clerks’ humor, as militant black comic creator Hooper X (Dwight Ewell) dissects the racist undertones of the Star Wars trilogy. It was great fun, like a geeky twist on Tarantino’s Like a Virgin deconstruction in Reservoir Dogs. But the humor is nuanced. It’s quickly revealed that not only is Hooper’s rage an act to sell his comics, but he is also a closeted gay male and close friend of Banky and Holden. 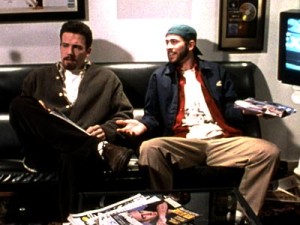 As Holden and Banky, Affleck and Lee created a genuine on-screen friendship. It was one my friends and I related to…until the final twist.

The latter two characters would be familiar to Smith, and not just because both Affleck and Lee appeared in Mallrats. In Clerks, Mallrats, and again here, Smith features the same central duo: immature twenty-something white males with potty mouths. The primary character is more serious, contemplative, semi-neurotic, and dealing with relationship issues. The sidekick is wacky, always given the movie’s funniest lines, but given short shrift in the plot. Here, Holden was our Dante/Quint, and Banky was our Randall/Brodie. The jokes were raunchy and familiar, and the laughs hit hard.

More, Smith seems to know his audience. Any homophobes in the theater get their say through Lee, who spouts gay slurs and stereotypes throughout the film. Featuring gay characters in a positive light, and having Banky spout ignorance, was a subtle way of Smith attempting to educate a more narrow-minded contingent of fans.

Chasing Amy slowly changes tone, though. While all of Smith’s films had dealt with romantic relationships, none had been a romance film. Amy becomes that as Holden befriends unobtainable Alyssa. Their friendship is tinged with longing, and not just on Holden’s side — Alyssa’s feelings for a man make her question her own sexual identity. The scene where Holden confesses his feelings, followed by a rain-soaked argument, is moving and engrossing. There is barely a laugh to be had, and shows a maturity not before seen in a Kevin Smith film.

The film takes continued twists and turns, and jokes keep coming, but Smith had sharpened his humor into a blade, using it to cut the tension of many tense, dramatic scenes. The audience, engrossed in this tumultuous relationship full of self-doubt, would find their laughter a welcome release — the film allowing us to breathe again. 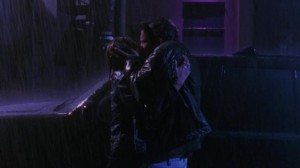 This kiss in the rain was Alyssa finally giving into her feelings for Holden. In most films that would be the end, but here it’s only the beginning of a journey full of self-doubt and jealousy.

While the romantic comedy fan in me was enjoying the Holden/Alyssa relationship, I was also empathizing greatly with Lee’s Banky. I was in my mid-20s and I had lost many friends to their girlfriends. I was all-too-familiar with the pattern of friends who hang out when they’re single, and then don’t return your calls when in a relationship. I saw Banky losing his lifelong friend to a new relationship, and, for the first time ever in a Smith film, I felt bad for the sidekick. Smith had finally created a supporting character with his own arc.

Holden and Alyssa’s relationship eventually hits the rocks when Holden finds out Alyssa was not always gay. The climax (so to speak) comes when Holden, desperate to save his friendship and his relationship, proposes a three-way to both Alyssa and Banky.

That was where the film took things too far. Until that point I felt Smith’s film had portrayed characters acting in ways that felt honest. This twist seemed to be the writer/director choosing to go with a wacky ending over a heartfelt one, or maybe he just wrote himself into a corner and couldn’t find a more earnest resolution.

The group sex idea felt totally outside the realm of Holden’s character. More, that Banky agreed, seemed to me a full character betrayal. I had completely understood Banky’s disappointment with a friend ditching him for a new relationship — it’s a real, common occurrence among single male friends. That Smith chose to write that entire emotion as based in latent homosexuality felt like a missed opportunity — an honest look at friendship was undermined by turning one character into a stereotypical gay male predator.

The film does recover from that moment, with an ambiguous ending that reminded me of The Graduate. Despite my disappointment with the final twist, the movie overall remained an on-screen romance that came across as honest and real. I left the theater entertained and believing Smith would be the next great voice of cinema. 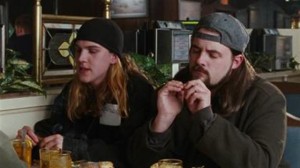 Jay and Silent Bob (Jason Mewes and Kevin Smith) appear in Amy, breaking the mood of the film.

He tried. His follow-up film, Dogma, attempted to analyze religion the way Amy deconstructed relationships, but to lesser effect. While amusing, the picture is scattered and scatological.

But it was with his next effort, Jay and Silent Bob Strike Back, that I realized Smith was not an auteur with things to say, but a writer of increasingly insipid comedy. I first saw Smith speak at a convention in 2001, followed by a preview screening of Strike Back, and I realized he was a more amusing speaker than filmmaker.

History would prove that assumption true, as Smith is now an accomplished podcaster, while the best thing I can say about his post-Strike Back films is that there aren’t many of them.

I have seen all of Smith’s directorial efforts, always hoping to see even a hint of the filmmaker that made Chasing Amy. But from Jersey Girl to Zack and Miri Make a Porno to Cop Out and even Red State, Smith has become a serviceable, but completely unexceptional, director of (mostly unfunny) comedies. I would characterize Smith’s later directing work as on par with Tom Shadyac or Steve Carr. If you don’t know those names, you can look them up, but had Smith not been an indie darling in the mid 90s I don’t think you’d know his name either.

I don’t mean that to say Smith is a one-film-wonder, still coasting on Clerks, because I have gone back and watched his directorial debut — it doesn’t hold up. Jokes that pushed the envelope in 1994 now seem almost tame. More, Clerks is less a film than it is a series of sketches loosely tied together. I loved it when I was the characters’ age and related to their Generation X angst, but it is a movie with limited appeal that is quickly outgrown.

I had hoped that after Cop Out’s critical drubbing Smith might — as he did after Mallrats’ failure — return to his roots and make more personal films. That hasn’t happened. While he has done more low-budget films, such as Red State, it appears the filmmaker who made Chasing Amy is gone forever.

It is a shame. With Chasing Amy Smith showed himself to be a talented writer who could balance both comedy and drama with equal measure. It remains a go-to film when I want to laugh, one of the most honest romances caught on screen, and a progressive view of LGBT characters in cinema. Yet it’s the only Kevin Smith film I can recommend.