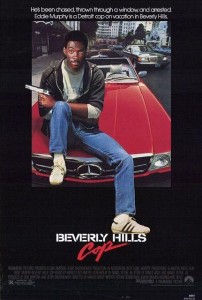 As early as the 1910s film studios realized familiar faces could bring in audiences. From Florence Lawrence to Humphrey Bogart, Marilyn Monroe to Charlton Heston, Tom Cruise to Will Smith, the right movie star can trump story, script, and even production value and turn terrible films into box office gold.

As a child, though, I didn’t understand the concept of following actors; instead, I followed characters. I wanted to see the next film with Kermit the Frog, Luke Skywalker, or God. I wasn’t thinking about Jim Henson, Mark Hamill, or George Burns.

That changed in 1984 when I found my first cinema idol, the man I wished I’d grow up to be.

Much to my parents chagrin, that man was Eddie Murphy.

I was not much of a Saturday Night Live fan when I was young. While I didn’t have a set bedtime, midnight was a bit later than I usually stayed up. I’d seen the show a few times but I was neither a fan, nor did I even know the comedians in the cast.

But in 1984 I had become a cinephile, seeing dozens of films in theaters and countless more on VHS. In addition to the standard kids fare, like Ghostbusters and The Neverending Story, my tastes were starting to evolve. Thanks to Siskel & Ebert I was asking my parents to take me to see some movies where I was clearly not the target audience, such as Amadeus, as well as the fairly risque Johnny Dangerously (I saw it in theaters once… once).

My older sister Susan, home from college for Christmas break, witnessed my maturing interest in film and felt there was one movie phenomenon I was totally missing: Beverly Hills Cop. It had been out a few weeks and had started to build amazing buzz. Critics loved it, and it was topping the box-office. 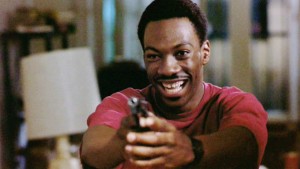 But it had a hard-R rating, with nudity, intense gun violence, and more curse words than I could count. My parents were fairly lax about what media I consumed (a year later they’d let me rent Revenge of the Nerds knowing full-well what I was about to see), and Susan decided it’s better to beg forgiveness than to ask permission. So she took me to the mall, ostensibly to Christmas shop, but, in fact, to see my first R-rated film: Beverly Hills Cop.

I was absolutely awestruck. I had never seen a movie as extreme as this.

The story, originally intended to star Sylvester Stallone, followed fast-talking Detroit police detective Axel Foley’s trip to Los Angeles investigating the murder of his childhood friend.  But the cop becomes the criminal when clues point to wealthy art dealer Victor Maitland, and police actually authorized to act in the Beverly Hills jurisdiction try to reign in Foley’s unorthodox inquest.  The result is quite a bit of 80’s action, as well as the usual fish-out-of-water jokes, as Foley works both with and against the Beverly Hills Police Department in trying to bring his friend’s killer to justice.

The violence excited and frightened me. I’d seen guns on the big (and small) screen, but before Beverly Hills Cop I’d never seen a man shot twice in the head; chunks of the victim’s skull falling to the carpet. I’d seen car chases on Dukes of Hazzard and other shows, but none had the metal carnage like the truck chase in the film’s opening minutes. I’d seen machine gun shootouts on The A-Team, but those didn’t actually have people falling dead from the wounds.

Then there was the language. My parents had been known to use a few choice words but never had I heard expletives used in this way. Murphy had gone beyond just cursing, he turned his Beverly Hills Cop dialogue into a virtual tone poem of profanity. So shocked was I that I completely misunderstood the main character’s name — in my mind Murphy starred as “Asshole Foley”, with every single character referring to him by that descriptive term. Given the way he acted, who could blame them?

Yet, the entire picture was set to a light, pop score. The synth tones of Harold Faltermeyer ran throughout, interrupted only by chart-topping hits by The Pointer Sisters, Glenn Frey, and Vanity. I was never afraid or scared, I was enthralled. My adrenaline was pumping, I was rocking, and, most importantly, laughing. I had never before experienced a film that felt subversive, like I was seeing a peek into the adult world, hearing how they talked with no kids around. 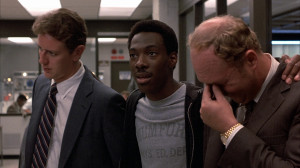 More, I loved Eddie Murphy. The comedian is in nearly every frame of Beverly Hills Cop and his energy is infectious.  Here the actor perfected the con-artist persona he previously used on the small screen, as well as in 48 Hours and Trading Places.  No matter how dangerous the situation, I knew Murphy would be able to talk, joke, or shoot his way out of it. I don’t recall ever laughing quite as hard as I did in that theater watching Axel Foley stick a banana up the tailpipe of that car staked outside his hotel.

I walked out of the theater ecstatic. I  wanted to see more. For the first time in my life I was starstruck and wanted to see everything Eddie Murphy had done or would do.

I made it a point to stay up late that week and watch Murphy host Saturday Night Live (his “White Like Me” sketch still makes me laugh). Quickly I went to the video store to rent his previous two hits. And I went opening weekend, again with Susan, to see The Golden Child.

Yes, I even bought the novelization to try and quell my excitement two years later for Beverly Hills Cop II.

I started buying Eddie Murphy comedy albums and watching Raw and Delirious. Through those specials I connected with Murphy, because I realized I idolized him as Murphy in his youth idolized Richard Pryor. I even found myself trying to tell Eddie Murphy-style jokes, and, for a time, flirted with the idea of doing stand-up comedy. I didn’t have much of a sense of humor as a child; I developed it in my teen years and Murphy was my teacher.

My parents were not overly fond of their son’s new hero. The string of profanity that emitted from our family room television would prompt my mother to use a few choice words of her own.

I didn’t see it the way she did. Murphy’s complete ownership of his vocabulary allowed me to see the power words have without fear. As a young kid I would curse for the wrongness of it, but Murphy helped me see that cursing punctuates language with an emphasis that nothing else can emulate. 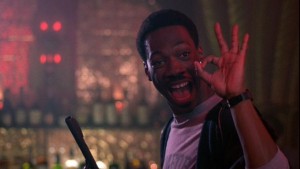 Older generations would state that swearing was for the dumb; Murphy showed me the truly intelligent know-how to wield every word for maximum impact. Some listeners have complained about the language we sometimes use on Now Playing Podcast, but I would not change a syllable. I believe the complete use of the English language allows me to express myself uniquely and clearly. I learned that from Murphy’s ad-libs and stand-up routines.

I wasn’t the only one to fall under Axel Foley’s influence. Beverly Hills Cop became the first R-Rated film — and the first comedy — to gross more than $200 million at the box office. That was a very exclusive group well into the 1990s.

I must admit that Ghostbusters, with its lighthearted comedy, special effects, and giant Marshmallow Man, left a cinematic legacy that may be greater than Beverly Hills Cop.  The Ghostbusters formula is aped to this day with films like R.I.P.D., Men in Black, and Evolution. There’s even a director signed for Ghostbusters III.

On the other hand, I don’t feel Murphy has aged as well. While his box-office mojo reigned for many years, even as a child I knew his follow-up films, The Golden Child and Beverly Hills Cop 2, didn’t measure up to his first star vehicle. While Coming to America was a brief return to form, it was also the last time I loved an Eddie Murphy film.

After The Distinguished Gentleman I realized his films had dropped significantly in quality, but due to my childhood devotion, I saw every film Murphy released through the 1980s and 1990s (yes, even Holy Man and Life). I watched every new Murphy movie hoping to laugh as hard as I did in Beverly Hills Cop and Coming to America. I finally gave up in 2001, I could not abide Pluto Nash.

But Murphy was the first movie star to impact my viewing habits. For that reason, even though I should know better, I continue to cross my fingers and hope the “Asshole Foley” I know and love will be back in Beverly Hills Cop IV.