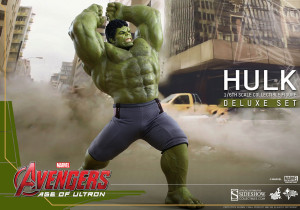 In the upcoming eagerly-awaited Marvel’s Avengers: Age of Ultron, the Earth is in danger again as the evil artificial intelligence Ultron is set on wiping out all life on the planet, and it is up to the Earth’s mightiest heroes to stop the terrible fate from happening. 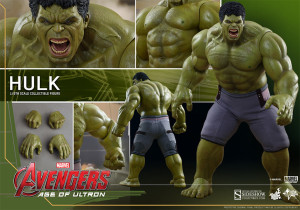 –              Authentic and detailed likeness of Hulk in Avengers: Age of Ultron with separate rolling eyeballs.  This head shows his screaming look with detailed wrinkles and skin texture

But if you order the  Hulk Deluxe Marvel Sixth Scale Figure Set you get the figure and accessories detailed above, and 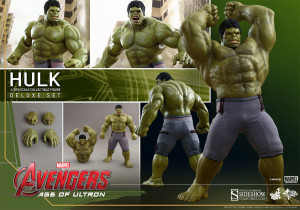 –              A second newly developed angry head with separate rolling eyeballs (this one is snarling, not screaming)

Don’t miss out on adding the incredible Hulk to your Avengers: Age of Ultron collection!  Order now at Sideshow Collectibles site!